Put your notes in here. Type them, publish them, view them, edit them, save it and print them. Notes are stored locally, if you clear your browser history they will disappear. Notes are a great way to add your own notes, from other sources to this station. 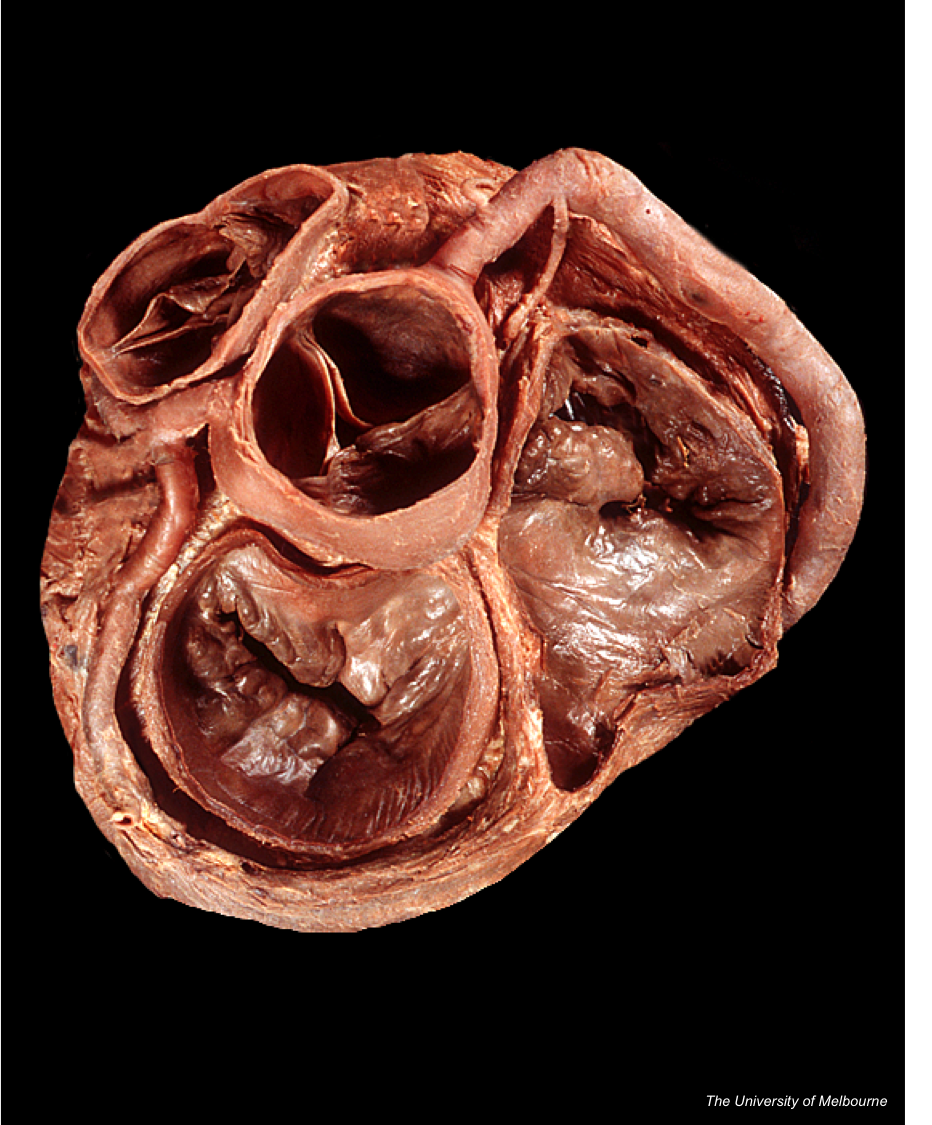 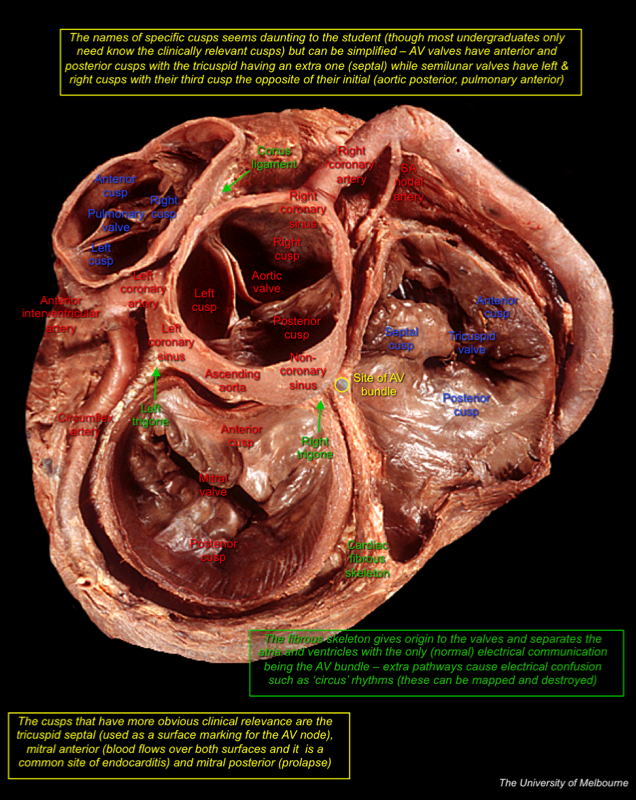 The right coronary artery (RCA) originates above the right cusp of the aortic valve. It travels down the right atrioventricular groove, towards the crux of the heart. It branches into the posterior descending artery and the right marginal artery. At the origin of the RCA is the conus artery.

In addition to supplying blood to the right ventricle (RV), the RCA supplies 25% to 35% of the left ventricle (LV).

In 85% of patients (Right Dominant), the RCA gives off the posterior descending artery (PDA).

The aortic valve is one of the two semilunar valves of the heart, the other being the pulmonary valve. The aortic valve normally has three cusps, although in 1-2% of the population it is found to congenitally have two cusps. It lies between the left ventricle and the aorta.

Commences at the upper part of the base of the left ventricle, on a level with the lower border of the third costal cartilage behind the left half of the sternum. It’s total length is about 5 centimetres (2.0 in).

The only branches of the ascending aorta are the two coronary arteries which supply the heart; they arise near the commencement of the aorta from the aortic sinuses which are opposite the aortic valve.

The left coronary artery is an artery that arises from the aorta above the left cusp of the aortic valve and supplies blood to the left side of the heart.

It typically runs for 10 to 25 mm and then bifurcates into the left anterior descending (LAD) and the left circumflex artery.

The artery supplies the anterolateral myocardium, apex, and interventricular septum. The left anterior descending (LAD) typically supplies 45-55% of the left ventricle (LV) and is therefore considered the most critical vessel in terms of myocardial blood supply.

The coronary sinus is a collection of veins joined together to form a large vessel that collects blood from the heart muscle (myocardium). It delivers deoxygenated blood to the right atrium.

The coronary sinus is a collection of veins joined together to form a large vessel that collects blood from the heart muscle (myocardium). It delivers deoxygenated blood to the right atrium.

The cardiac skeleton, also known as the fibrous skeleton of the heart, is a high density single structure of connective tissue that forms and anchors the valves and influences the forces exerted through them. The cardiac skeleton separates and partitions the atria from the ventricles. 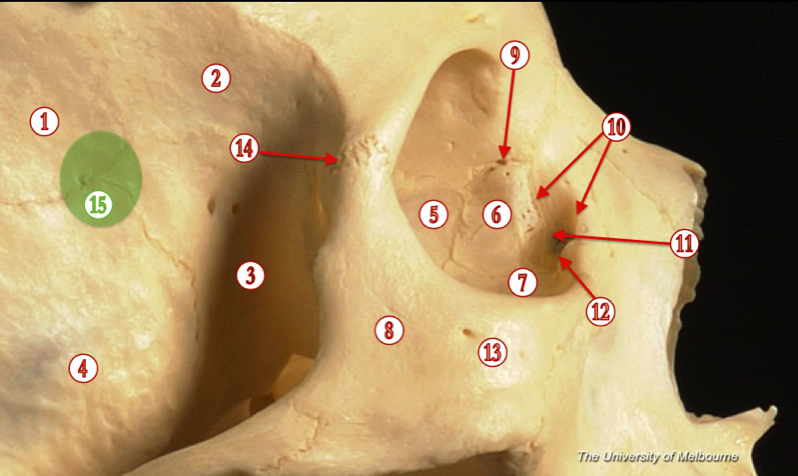 Name the ocular muscles and their nerve supply
Answer
Orbital muscles are:

Nerve supply can be remembered by the mnemonic LR6 SO4 AO3: 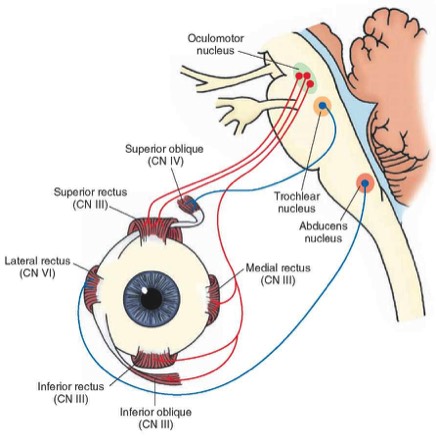 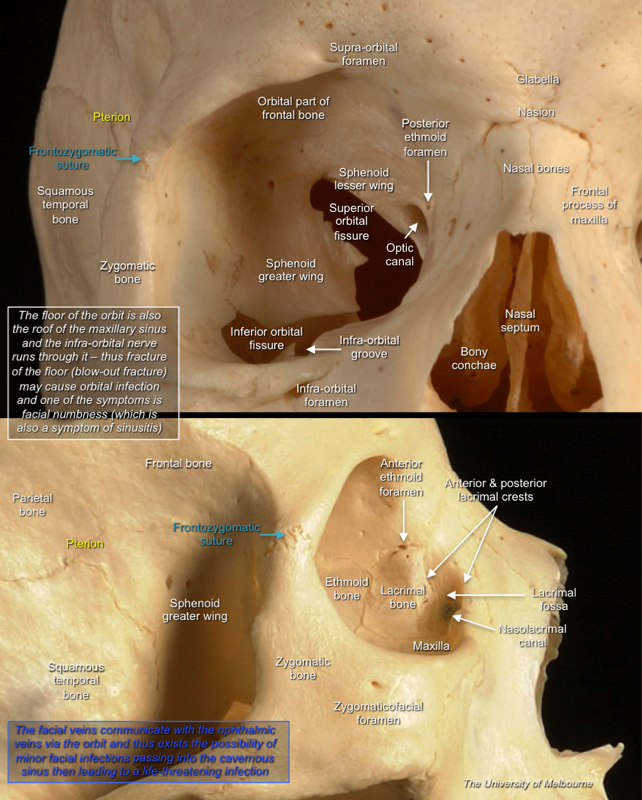 The orbits are conical or four-sided pyramidal cavities, which open into the midline of the face and point back into the head. Each consists of a base, an apex and four walls.

The apex lies near the medial end of superior orbital fissure and contains the optic canal (containing the optic nerve and ophthalmic artery), which communicates with middle cranial fossa.

The roof (superior wall) is formed primarily by the orbital plate frontal bone, and also the lesser wing of sphenoid near the apex of the orbit. The orbital surface presents medially by trochlear fovea and laterally by lacrimal fossa.

The medial wall is formed primarily by the orbital plate of ethmoid, as well as contributions from the frontal process of maxilla, the lacrimal bone, and a small part of the body of the sphenoid. It is the thinnest wall of the orbit, evidenced by pneumatized ethmoidal cells.

The lateral wall is formed by the frontal process of zygomatic and more posteriorly by the orbital plate of the greater wing of sphenoid. The bones meet at the zygomaticosphenoid suture. The lateral wall is the thickest wall of the orbit, important because it is the most exposed surface, highly vulnerable to blunt force trauma.

Boundaries
The base, which opens in the face, has four borders. The following bones take part in their formation: